Federico Garcia Lorca was a poet and a play write. He said what he thought at a time when people were willing to kill over ideas. I post today a podcast about his view of what the road means. Some metaphor for my own perhaps, “there is refuge in the road”.

A statue of him stands in the Plaza de Santa Ana in Madrid, just across from a tavern where other writers and want to be heroes like Hemingway collected during the Spanish Civil War.

Lorca was taken by the Flange it appears, a right wing group supported by the Monarchists and the Fascists both from Spain and also Italy and Germany and was killed in the Province of Andulicia not far from where he was born.

Because of his ideas he was killed.

Hemingway killed himself in Idaho because he was getting old. 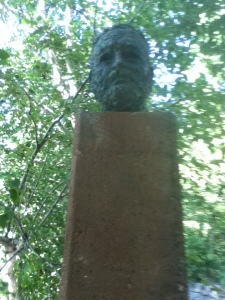