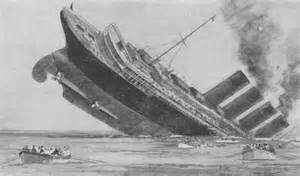 Its been a 100 years but the sting of it still rings through the telling.

A German U-boat was able to approach and sink the Cunard liner off the coast of Ireland on this date 100 years ago because she had no destroyer escort, despite wartime conditions.

Well it turned out both were true. And in the end a lot of people died, including Alfred G. Vanderbilt Sr. who did not know how to swim, but gave his life vest to a woman with a child who lacked any means of flotation.

In the post war adjustment process of reparations the family of Mr. Vanderbilt made a claim against Germany for his wrongful death. Mr. Vanderbilt was worth $15 million dollars, but he never held a job. And because he himself was not productive, despite the productivity of all he owned, his family recovered zero.