There was a Demon that lived in the air. They said whoever challenged the Demon would die. Men came to the high desert to ride it. They were called “test pilots.”
And no one knew their names.

Should you desire that sense again of anonymous heroism captured in the film I have to recommend Rebecca Wallick’s Growing Up Boeing. (www.growingupboeing.com )This reprise features fearless men making legends out the untamed world of military and commercial aviation. 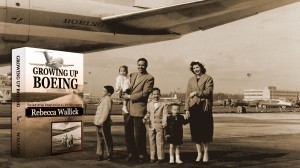 Rebecca had the great fortune to grow up in the Seattle area at the same time we were testing the limits of horsepower in the air, and sometimes on the water. Her father was one of those test pilots whose names we would never know, until now.

One can taste again the wonder of the 1950’s and 1960’s as Lew Wallick’s career as a test pilot and a father is traced through retirement in the 1980’s. Compelled to tell the story, the mention of her last name opened doors for her at The Boeing Company that an outsider simply would not have access to when writing this account.

We have not always had eventless predictable flights. They became eventless and predictable because of the experiences, the efforts, and sacrifices of men like Mr. Wallick. 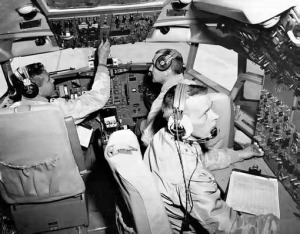 Like in a novel we grow to care about her relationship with her father. The book features the kind of touching tableau most of us go to the movies to feel with this intensity.

His was a great life, lived at a great time. Because the work was so leading edge Mr. Wallick had the occasion to fly with the famous; Charles Lindbergh, Neil Armstrong, Howard Hughes and often royalty, including Prince Philip, who actually wrote back to the author. The 2013 letter from Buckingham palace is included in the book.

It is clear that an era has ended. Some say it was the merger of McDonnell Douglas with Boeing, others say it was the adoption of too many rules made necessary by concerns of collusion between the company and government.

Whatever the cause, the seat-of-the-pants, talent-rises-to-the-top meritocracy that gave us Lew Wallick has been compromised.

There will be no more legends built from sheer talent, risk taking, and character.

We instead have a grinding bureaucracy, where the esprit de corps is discouraged and the individual soul lies crushed. What remains is just a job, made less thrilling by simulators and other machines that leave man hollow. He might have the right stuff, but we will never know, because we have legislated away his opportunities to show it. 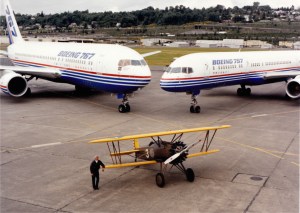 So long Lew. I am glad I learned your name.