Two years ago my wife and I traveled to Normandy for the express purpose of visiting invasion beaches. As is the case with many such places, the experience cannot be adequately conveyed in photos.

Most dramatic of all was Point Du Hoc. I share my pictures here from the top of the beach cliffs our Army Rangers were to scale.

Once at the point, our soldiers had to contend with this pillbox. Perhaps this is just an observation point, but one can imagine a German taking up a post there to shoot anyone coming over the top. The edge of the precipice can be can seen as there is now a fence to keep duffers like me from falling into the English Channel. 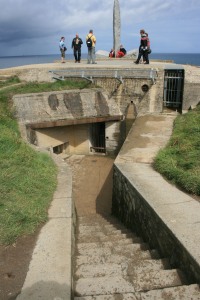 The place had been bombed mercilessly by the air forces and then by the navies there. Point Du Hoc remains cratered, with only vegetation and I suppose a bit of erosion changing the landscape from what it looked like today in 1944.

Omaha Beach in contrast has been rebuilt into more of a resort. Where once were seemingly impregnable defenses now stands a casino and a nice little village one can drive to down the Vierville draw. Unlike the rest of France, Omaha beach sports a remarkable number of American flags flying from the homes and businesses. Not all the concrete defensive positions have been removed however.

We sent a National Guard Unit to assault this beach. Many of the men had never been in combat before. The bombers which were supposed to soften up the place and

leave craters missed their targets, killing a lot of French civilians further inland instead. Thus there was no cover that morning when the men landed at Omaha beach.

The defenses in the Vierville draw were so formidable the men could not over come them in a frontal assault. Instead they did what the planners thought they couldn’t do, climb the hills to the left of the draw and take the emplacements from behind. This was not easy. 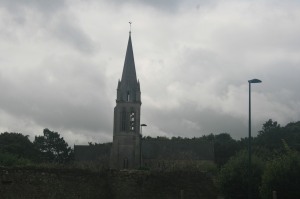 Just out of the draw lies a church the men fought over for the entirety of D-Day and through the night to June 7th.

A short drive away lies the American Cemetery. This is a moving experience, however our visit was cut short by gale force winds and rain. Perhaps that is the appropriate metaphor for the experience. 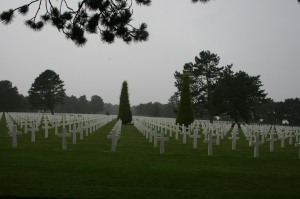 We ended the day at Sword Beach, where the British had landed. Several miles inland lay the Pegasus bridge, so named now as it was by the invasion planners. The bridge was taken by a perfectly executed glider assault, and held until relieved by British forces moving inland. A covey of horses and riders peacefully glided past us at the surf line at Sword Beach. How different and poignant this moment was.