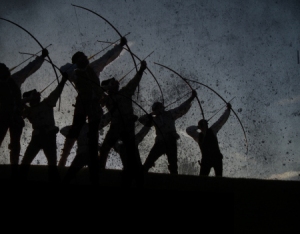 The scene begins as the young, yet war like Henry has assumed the port of Mars, and invaded France to prove his mettle.  It has been a good campaign but the English are exhausted. They must get past the French army at a place called Agincourt to make to to Calais, and escape back to England.

The Earl of Westmoreland turns to the Earl of Salisbury and Dukes of Bedford and Exeter to laments they have inadequate troops to meet the French.

Westmoreland: Of fighting men they have full three-score thousand.

Exeter: There’s five to one; besides, they all are fresh.

Westmoreland: Oh but we now had one ten thousand of those men that do no work today!

What’s he that wishes it so? My cousin Westmoreland? – No my fair cousin:

If we are marked to die, we are enow to our country loss; and if to live, the fewer men the greater the honour. God’s will I pray thee, wish not one man more….. 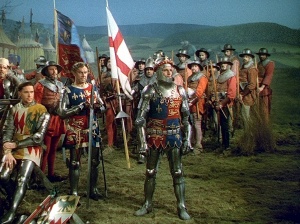 He that hath no stomach for this fight, let him depart; his passport shall be made and crowns for convoy put in his purse. We would not die in that man’s company that fears his fellowship to die with us. This day is call’d the feast of St. Crispian; He that outlives this day, and comes safe home, will stand tip toe when this day is nam’d, and rouse him at the name of Crispian….

We few, we happy few, we band of brothers; For he today that sheds his blood with me shall be my brother; be he ne’re so vile, this day shall gentle his condition; And gentlemen now abed in England shall curse themselves they were not here, and hold their manhood’s cheap while any speaks that fought with us upon St. Crispin’s day!