This summer this lawyer found himself, purely by accident in a venue employed to create a reality TV show, The Jersey Shore.

Then several weeks later Hurricane Sandy was barreling down on this boardwalk, benignly referred to as “Seaside Heights” on the map. It is not some comfortable venue for bourgeois America like perhaps Cannon Beach, Oregon. Instead is a modern-day Sodom and Gomorrah.

I had never seen the show before I visited there, nor even heard of it. The locals complained about the crowding and traffic the filming generated. There is much more to complain about. I wandered into one little shop of horrors looking for some kind of keepsake to remind me of my travel there, but sensing my very soul was at risk I left quickly.

Just ahead of the hurricane’s landfall, while looking through the television channels trying to find the World Series, I happened upon a scene from The Jersey Shore. Everyone pictured there wore not enough clothes; they were buff, busty, and extremely intoxicated. The primary difference between the “actors” on the show and the patrons of Seaside Heights appears to be a question of physique. The boardwalk food was, predictably, fattening and generally not good for a Christian or Jew. 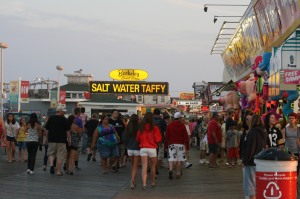 So, I was not surprised to see this hurricane coming down on this bit of human excess. God must have hit the same channel in his search for the Series as well and decided to do something about it.

According to the reports I have heard, the place was wiped out.

We are better for it. 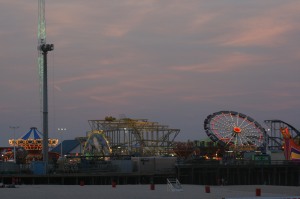