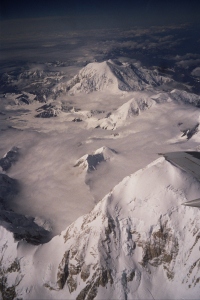 In the summer of 2006, I trekked again north to attorney John Weston’s cabin out in the wild. This time, I brought my then 12 year old, Johnny. It was time for Johnny to get away from the TV, the video games and other devices that require electricity, which comes at a premium when one lives off the grid. All those distractions and we wondered why Johnny couldn’t read.

Of course we more mature Americans all dream of being “green”. We drive SUV’s to portray ourselves as “outdoorsy”. We want the world to be “sustainable” and live in a kind of give and take with nature. Well folks, nature doesn’t give up much without a fight, and there is plenty of take. Beautiful, but beguiling, nature will have its way with you.

We were lucky to have a ride on the Disneyland painted 737 from Anchorage to Fairbanks. When a child is 12 it is easy to embarrass him. I made some crack to the greeting flight attendant about how Johnny thought this meant we were heading for Disneyland, not Fairbanks, and she took a shine to us. We got lots of goodies, including her life story of dreams of being a wild life biologist there in the Alaskan interior, which was her real career by education. This flying business just paid the rent. You see, it isn’t that easy being green. Wildlife pays no salary but provides another sort of wealth. Time off the grid is not measured in billable hours or work schedules. Instead time is measured by the rising of the sun from the horizon, it’s crossing the sky, then in the Alaskan July the suns return only to the horizon. And in that space you learn who you are.

The pilot noted Denali was making a rare appearance and diverted the flight to allow us to snap some photos from the port side of the plane. We land at Fairbanks International, an air strip which is flanked by two long ponds that is filled with float planes, for many connect here to cabins in the interior via these much smaller aircraft.

Not us. We load ourselves and our gear into Johns Chevy Avalanche, a completely necessary vehicle for the terrain, and drive 80 miles south on the Richardson Highway to Shaw creek, then board Johns jet boat to cross the Tannana, a huge torrid muddy of a river that most in the rest of the country have never heard of but is about as wide as the Mississippi at Memphis. Dodging sand bars and snags, we make are way to the entrance of the 80 Mile Clearwater, not it’s real name but most descriptive of where the creek is and how it appears, clear. Upon this waterway lies Weston’s Cabin among a clutch of others who seek the mind clearing event of life away.

We woke the first morning in Weston’s cabin to see a moose across the creek feeding. In fact, we saw so many moose we decided they were an insurgency, and declared them to be the Moosahadeen. Beaver, muskrat and other four legged creatures thrived under a sky filled with raptors of one kind or another. Once crossing the raging Tannana we witnessed an aerial battle of a bald eagle and a falcon of some kind. Large and slow the eagle was easily out maneuvered by the falcon that rose high the folded its wings to plunge toward the eagle. The larger bird seemed to know when to pull up, flip over on its back and bear its talons toward the on rushing foe. Two or three times they collided like this, until finally, locked in a mortal grasp, unable or unwilling to let go, they fell to earth together. We had noted a mated pair of eagles sitting together on a tree earlier. Perhaps the content of the nest was in issue.

Nor is life on the Clearwater all cocktails and engaging conversation for genus species homo sapiens. John’s wife Mary fills the role of frontier wife. From the time she is up until the time she goes to bed there is a steady stream of coffee and food from the kitchen and parenting of the three boys the Weston’s had managed to generate in 16 years of marriage. The birth of twins were a hell of shock for John, natures little joke as John was well into his 50’s at the time, and Mary dresses them in different colors to tell them apart. Even then I couldn’t make it out. It is good that there are two because they are so “active” I am concerned we might lose one in the dangers of the wild.

I also noticed that anyone who lives there any significant amount of time lacks the flab one sees in town.  The wood chopping of course leads to heat and cooking, but we also hauled in propane and gasoline to run generators and other devices that made for hot showers and the radio. This means a long boat ride and drive into town, and lots of muscle. Food of course is hauled in as well. The cabins themselves always have some kind of need; a repair there, a ditch dug to or from, an improvement here. The work is constant, and the wolf is not far from the door.