It is a year later, I ride the bus to the next annual installment of the same seminar. I alight from the bus and head toward the convention center in a light rain. A man with an electric guitar presides at the covered entrance to a retail shop, not yet open, and his long lingering chords evoke the off world sense of a grey Seattle morning, much like Los Angeles in the film. What I said last year after the session remains true.

I stepped out of the seminar on estates and tax into the rain and neon of wet streets, punctured by flashing red, blue and orange lights of a city being washed. It is already dark. I headed down Pike to 3rd where the buses run, crowding past the young who do not dress well enough for the weather to make a fashion statement, and the rest of us.

The bus stop is a slice of humanity. The language is Chinese, Spanish, some form of English but above all the language is street. Many are having their main meal for the day, take away pizza slices or some kind of boiled sausage. Everyone is wet and the street smell is replaced with a mixture of the food and the damp dirty clothes.

The bus back to Ballard finally arrives. I have learned the predicted time of arrival on the electric bus stop signs are meaningless. I crowd aboard with the slice of humanity.

The number 15 to Ballard is full and I stand with one hand on the rail and the other clutching my cloth bag issued in the morning containing the binder stuffed full of the secret knowledge of lawyers. The woman sitting next to where I stand is not so lucky. She struggles to hold together a rain soaked paper bag containing the secret knowledge of doctors, or what looks to my experienced eye to be a colonoscopy kit as the contents emerge from it’s sides. Despite her apparent youth, the child with her calls her “Grandma”. 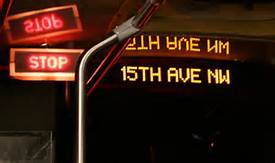 I run on a different blade than this lady. We had spent much of the day on topics this young grandmother probably will never need to know; how to advise clients who face a 3.8% Medicare surcharge on net investment income where her household income exceeds $250,000 per year. In fact no one on this bus will ever have a need to know this from the secret knowledge of lawyers.

“Does anyone have a spare bag?” our grandmother asked, her voice drowned out by the Chsdst, chsdst, chsdt of the bus brakes and the Doppler effect of a police siren passing by. Looking at the garish advertisement for trusts and accounting services on the old lady bag I had been issued with the secret knowledge binder in the morning I decided it was time to act.

I dumped out the secret knowledge of lawyers and handed her the bag. “Thanks” she said without looking at me, as eye contact is forbidden on bus 15. The bus roared to life, and several stops later grandma, the 4 year old and the bag of medical supplies stepped off the blade we ran together, and into her own.

One thought on “Blade Runner”